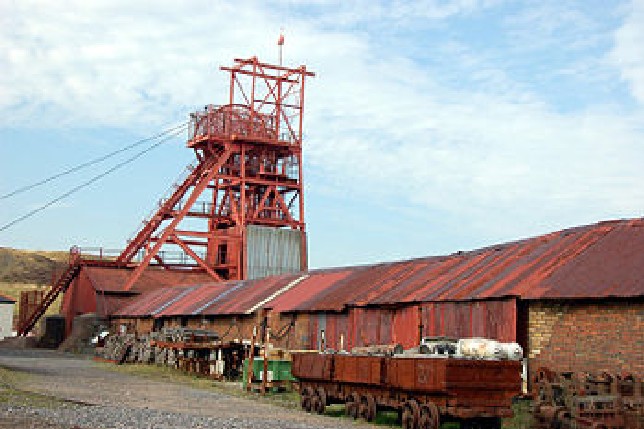 South Wales and dedicated to the Welsh heritage of coal mining.

The mine reopened for visitors in 1983. Big Pit is adjacent to the preserved

had long been admired for its natural beauty but exploitation in the cause of 's industrial revolution (traditionally dated 1730 - 1850) was to change all this for ever.

Welsh coal had been known since Roman times and small iron works had long dotted the landscape but the new demands of and the world were to be responsible for an explosive growth in population and a rapid disfigurement of the landscape. Steam was replacing hand labour and  factories were replacing homes as centres for manufacturing processes. Brtish engineers were building great iron ships and railways around the world. Welsh steam coal became the fuel of choice for boilers everywhere and new techniques enabled the use of coal (as coke) in iron smelting.  Smoking chimneys joined colliery winding gear to dominate the rows of terraced housing built in the Welsh valleys for immigrant workers from all around .

The two south eastern counties of Glamorgan and Monmouthshire contained abundant seams of coal and iron ore in their valleys. The market for coal was originally dominated by the demands of the iron trade but new collieries were opened as new markets developed and by the 1830's more coal than iron was being carried by canal barge down to the ports of and .

In 1870 coal production exceeded thirteen million tons and about half of this, now carried by the railway system,  was destined for the export trade.

Immigrant workers flocked to the mining areas in search of work. They came from , the English and from . In 1801 the population of Monmouthshire was 45,000. A hundred years later it had increased to 450,000. The flood of immigrants swamped the native Welsh speaking inhabitants and in much of the ancient language became a distant memory.

The miners and their families faced a grim existence. Thousands of miners died as a result of roof falls and underground explosions. Fathers often perished alongside their sons. The nation gradually became aware of the horrible conditions endured by the mineworkers and in 1842 the employment of women and young children in mines was forbidden. Government commissioners had found that children as young as six years of age could be found working twelve hour shifts underground. Younger children were used to control ventilating systems while older children and women hauled the coal from the face to the bottom of the mine shaft. The owners took little heed of the law, however, and a female worker was killed underground as late as 1866.

Above ground, overcrowding and insanitary conditions led to outbreaks of cholera. In 1849 there was an outbreak in Merthyr, Dowlais and Aberdare which claimed more than 800 lives. Even as late as 1922,  Aberdare had the highest infant mortality rate in .

In 1873 the Coal Owners Association was founded. A sliding pay scale was soon devised - if world prices for coal fell, miner's wages were lowered to protect profits. This led to tremendous hardship and unrest. The inter-war years saw a serious decline in the coal industry. Half of the pits closed in the 1930's and the years following the second world war saw a further gradual decline.

There follow short notes on locations once known around the world for the part they played in the world's first industrial revolution. Here in , they are perhaps better known for the price they paid.

The Price for Coal

(Tydfil  the Martyr) in Glamorgan is named for Tydfil, a Welsh princess said to have been murdered for her Christian beliefs in 480 AD. The town's massive Dowlais Ironworks was founded to exploit the abundant seams of iron ore and in time it became the largest iron producing town in the world. New coal mines were sunk nearby to feed the voracious furnaces and in time produced coal for export . By 1831 the population was 60,000 - more than , and combined. The town was the birthplace of Joseph Parry composer of the haunting Welsh tune Myfanwy and his humble home can be compared with the nearby mock-Gothic Cyfartha Castle built in 1825 for William Crawshay the famous iron master.

Aberfan. The Merthyr Vale colliery began to produce coal in 1875. Spoil from the mine workings was piled close to the village which had grown nearby. Tipping went on until the 1960's. The industry was by now nationalised but even the National Coal Board failed to appreciate the true nature of the monster they helped to create. In October of 1966 heavy rain made the giant tip unstable. The recent dumping of small particles of coal and ash known as tailings  seems to have been partly responsible. A thirty foot high black wave tore across the Glamorgan canal and swept away houses on its path towards the village school. One hundred and fourteen children and twenty eight adults were killed.

The (Fawr and Fach) housed around 3,000 people in 1860 but by 1910 the population had soared to 160,000. The had become the heart of a massive coal industry. Accidents below ground were common and in 1896 fifty-seven men and boys were killed in a gas explosion at the Tylorstown Colliery. An enquiry found that the pit involved had not been properly inspected over the previous fifteen months. Once there were 66 pits giving employment to thousands but the last closed in 1990.

Risca in Monmouthshire lay 900 feet above a seam of high grade coal known as the Black Vein. This coal was responsible for the many explosions and 142 men and boys were killed by one of these in 1860. The New Risca Colliery was opened in 1878 and thought to be safer but in 1880 an explosion caused another 120 deaths.

Senghenydd. Experienced one of the worst coal mining disasters in 1913 when over 400 men lost their lives. The incident led to a government inspired inquiry.

For more info on Theosophy

This is for everybody not just people in Wales

If you run a Theosophy Group you can use

this as an introductory handout

The South of Heaven Guide to